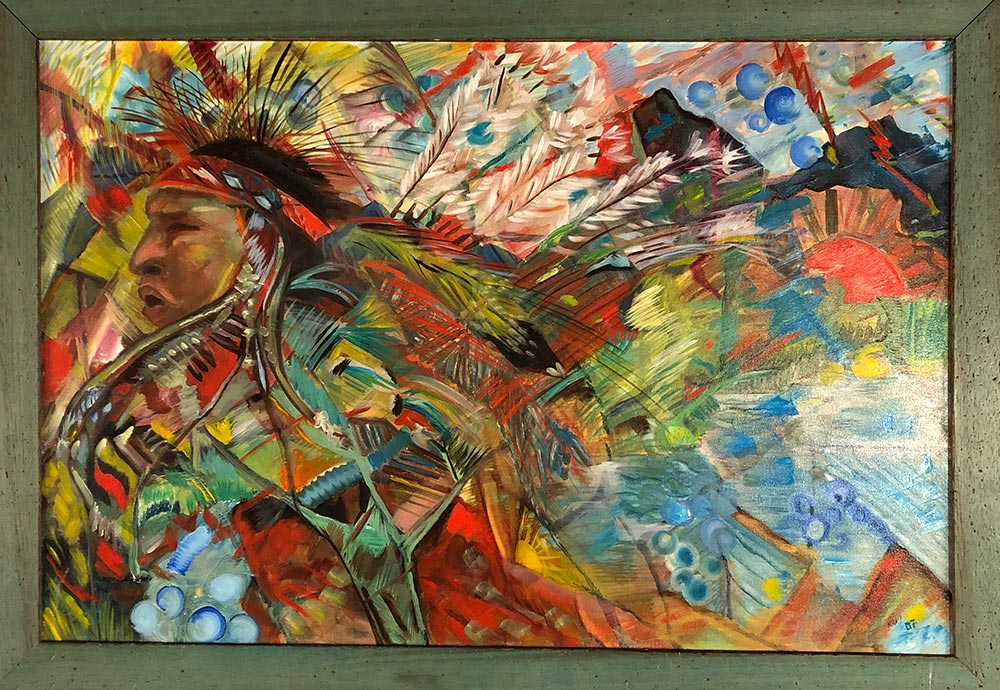 Kaki works in recurrent themes of the pow wow, rodeo, migrant workers, fish, water, and landscape. She is intrigued by open roads and pathways. The viewer is invited into the painting either to travel the road or the path, to partake in the pow wow or rodeo, or submerge in the aquatic world. Kaki’s respect for the work ethic of migrant workers and gratitude for the food they provide for our tables is expressed by elevating in her paintings those who are usually unseen and anonymous.

The artist, Kaki, is alternately known as Kathy or Kathryn Butterfield, née Peterson. The reasons for this are simple. One, it was a childhood nickname given by her younger sister who could not say Kathy. Two, it is way shorter to sign than the full name. Three, there is a spiritual significance to the artist. A student of Chogyam Trungpa, Rinpoche, she learned that “Ka” is a word for primordial command, while “Ki” is a warrior’s cry. Imbued with these three attributes, Kaki is the chosen name of the artist.

Kaki considers art to be any creative interaction and has worked in many mediums, including dance, performance art, acting, theatrical performance, television, film, and fluent communication in English to people from sixty-four countries. Her photographs have been published and featured on album covers as well as in film. She traveled extensively with her husband, the brilliant musician, Paul Butterfield, before settling down to raise their son. She is the daughter of an artist mother and a mining exploration father. The intersection of wilderness and vision are at the heart of her work.